Having traveled to (and even lived in) California over the past 8 years, I’ve certainly had the privilege of experiencing some of the States most uniquely diverse sights on offer.

It’s without a doubt that some of the first thoughts that enter our heads  include the glitz and glam of Los Angeles’ bustling celebrity hub, Yosemite National Park and of course the stunning Pacific Northwest coastline.

However for this post I want to share with you some of the more unusual spots within Northern California and provide just a short list of some of my personal favourites, from mountains to art installations, which of course can be enjoyed as either as part of a day trip, weekend break or simply added to your American road trip.

Pfeiffer Beach
Located off Highway 1 (and some rather minimal signage) lies a small cove leading to Pfeiffer Beach.
Pfeiffer Beach is regarded as one of the most intriguing beaches known along Big Sur.

Known for its uniquely purple sand, caused by the erosion of manganese (garnet and rose quartz) along the cliffs edge which have entered the sand giving the beach it’s scattered purple hues, these colours are often more noticeable after storms and makes for some amazing sights.

Pfeiffer beach is also a popular destination for photographers, with keyhole rock being another major focal point, keyhole rock is a unique rock formation with a (you guessed it) a keyhole shaped gap inside and when shot at the right time, most popular at sunset, can offer some amazing photo effects.

If you’re patient, soon enough you will have the chance to see the eruption which usually occurs every 30 minutes. 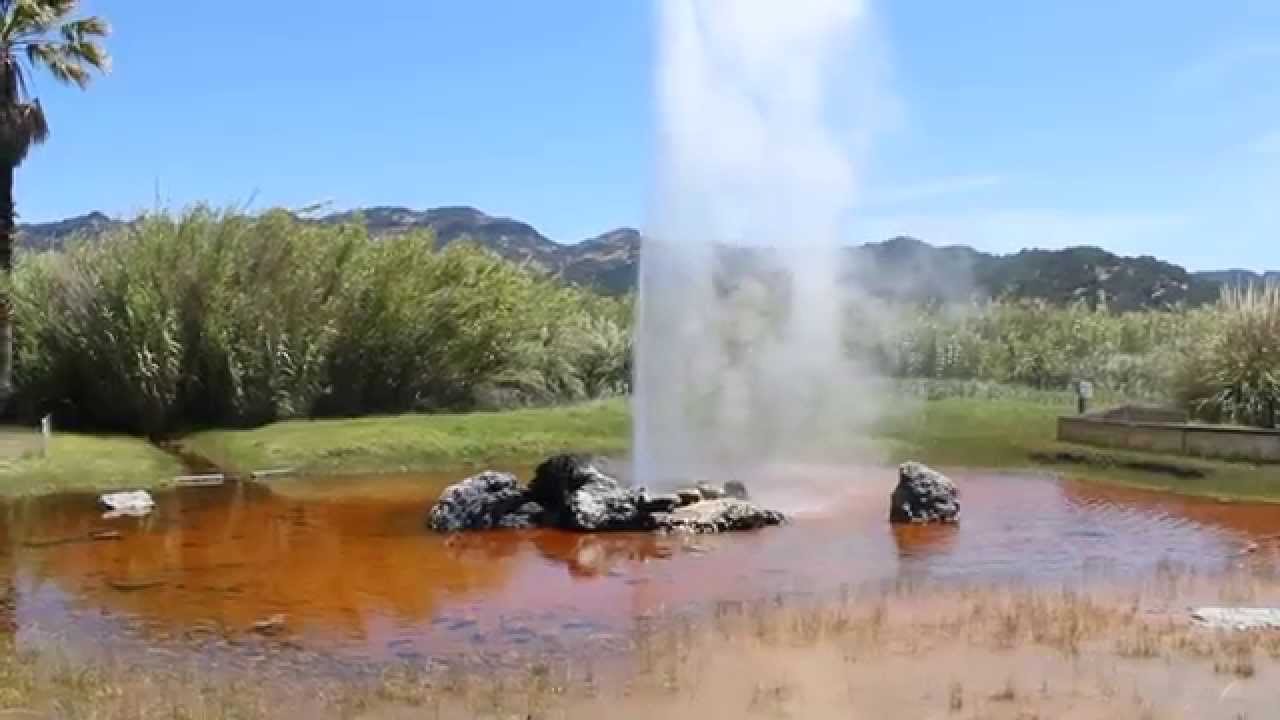 Mt Diablo
Located in Contra Costa County of California, many visitors to head straight to the summit for amazing views over the Mt Diablo State Park. On clear days you can even see as far as San Francisco.
Mt Diablo elevation reaches a total elevation gain of 3323 ft and takes roughly 6 hours to reach the summit – but not to worry, if you don’t fancy the hike you can drive, taking approx 50 minutes without stopping.

Fun fact: Mount Diablo is sacred to many California Native American peoples; according to Miwok mythology and Ohlone mythology, it was the point of creation. (Source Wiki)

Throughout the grounds you will find a variety of unusual art installations and up-cycling such as sculptures constructed of both scrap metal and natural resources, old walls and rubble decorated with graffiti art, along with a make-shift park consisting of tree branch swings, rock climbing frames and stone spiral mazes.

If you’re interested in seeing more quirky locations and photos then I highly suggest you check out my Instagram page, where I post my weird and wonderful discoveries.
IG: @Girlabouteurope

Lastly, be sure to check out some of my videos too over at Girl About Europe Youtube channel below ☆☆☆

I hope you enjoyed this post, what are some of your favourite hidden discoveries?

Disclaimer – All photos are mine unless stated and credited*

Oregon as a whole is often an extremely overlooked State in the US but most definitely one worth adding to any cross country road trip itinerary.

If you’re particularly fond of nature and other outdoor activities such as hiking, boating, camping and even swimming then Crater Lake, Oregon is definitely the place to visit.

With over 200 waterfalls spread across, 11 national forests and over 300 state parks, it’s no surprise that Oregon attracts thousands of visitors each year yet is still so underrated in comparison to its neighbouring National Parks such as Yosemite or Lake Tahoe.

Did you know that Oregon is home to the deepest and most vivid blue lake in the entire US?

Getting there
From San Francisco, California, you can take the I-5N which is the most efficient and fastest way, but if you have time to spare and prefer the more scenic route then definitely opt for Highway 1 Northbound along the Pacific North West Coast. You won’t regret it.

Once arriving across the Oregon State border you will have a few options for nearby* cities in which surround Crater Lake National Park, the most popular overnight stays being either Medford or Eugene. ( I stayed in Medford as it was closer and cheaper)

Just 66 miles (1hr 15m) North West of Medford via the OR-62 Route you will reach Crater Lake National Park.

Take full advantage of this gorgeous drive as you will be greeted by quirky little towns and stunning nature along the way such as Lost Creek Lake and the thousands of Ponderosa Pine Trees as you enter the National Park.

Oh and the occasional mountain…

Located in Klamath County, Crater Lake was once a former volcano (Mount Mazama) which erupted around 8000 years ago. Leaving behind a deep basin measuring 1949ft (594 meters) deep.

It has since been filled with years of rainfall and the melting snow from the surrounding mountains which have filtered and filled the lake, creating some of the most clearest and vibrabt blue waters to be seen.

Since there are no other streams or rivers which run into the lake, there is very little sediment affecting the clearness of the lake.

To put it super simply, it’s reflective blue hues are caused by the reflection of the sunlight which penetrates its depths. However I will leave a much more scientifically detailed explanation here.

Crater Lake relies upon climate, particularly the levels of evaporation and rainfall to keep its water steady throughout the year.

I entered Crate Lake via its south entrance and stopped off a Steel Visitors Center for a quick refreshment break before beginning the first part of the day around Crater Lake.

Here is a link to the Steel visitor center boop!

Here you will find tourist information, a cafeteria and outdoor parking.

Surrounding the perimeter of the lake is Rim Drive, a 33 mile scenic drive which loops the whole way round offering the most spectacular views.

There are even some viewpoints in which you can pull up to take a look and snap a few photos.

However be sure to check with the weather as during heavy snowfall periods these roads may be closed off for safety.

Despite this much effort is put into ensuring that access to the roads as well as Rim village is accessible throughout the year.

For the first part of the ‘hike’ I decided to follow the Discovery Point Trail, stopping off at various view points around the lake.

In comparison to the other hikes this was a fairly easy 4 mile trek, given that we visited during a scorching 104°F (40°C) summer, it was all we could handle.

Crater Lake certainly holds a certain spirit that speaks to the soul, the perfect place for anybody wishing to reconnect with nature.
You will truly be in awe at the raw power of nature and the forces of the earth can generate.

Unfortunately I was only able to spend a quick weekend away here but yet so pleased I chose to come here.

Even to this day I can still picture the mind blowing scenery and absolute peace I felt there and cannot wait to return again.

Some things of note before you visit Oregon State

• Pumping your own gas/petrol is illegal in the state of Oregon; however there will be an attendant to do this for you.

• There is also no sales tax, so the price that you see posted is what you’re actually paying.

I really hope you enjoyed reading this short but sweet post about beautiful Crater Lake and hope that it inspires you to add it to your itinerary.

This place holds so many special memories and hope you fall in love with it just as much as I did.